Although I’m mainly the 3D artist, last week I had worked on a few shots for our latest all-animated 2D production when I came across a problem. Of course, when problems come up in the post production studio, I leap to solve them. The shot I was beginning to work on involved pseudo-3D spheres. These spheres were made up of many kinetic circles that would join together with lines.

I was building the scene in our 2D post production program (which has a few 2.5D capabilities), and of course I was trying to make it better. I realized that the shot would show a better sense of scale if I could move around this simulated sphere with a virtual camera to see the lines connect the circles. After I spent the majority of the day brainstorming how to approach this new idea and realizing that building the shot in a 2.5D world would require days of manual work, I decided that I would have to create this effect in 3D and make it look 2D to blend with the rest of the project.

Although this shot involved a few headaches and more work than we thought it’d be, we decided to stay true to the storyboards our client had approved. Instead of toning down the shot and making it less resonant, I took the harder route and made it way more interesting than we thought it could be when we drew the storyboard. Here’s a frame of the animation for you to look at. 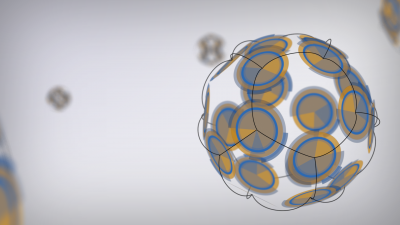